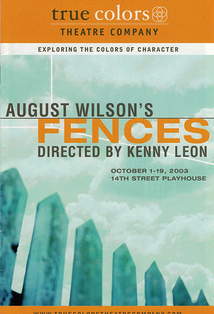 
Fences is the Pulitzer Prize & Tony award winning drama by August Wilson. Fences, the sixth Play in August Wilson’s Pittsburgh Cycle, Fences takes place in 1957 in what is assumed to be Pittsburgh, Pennsylvania. The play follows Troy Maxson, a 53-year-old man who struggles to provide for his wife and son in a time when slavery is over but the civil rights movement has still not come to fruition. Troy used to be an amazing baseball player, but was not able to make it to the Major Leagues due to the color of his skin. Troy has had to settle into the life of being a trash collector and barely scraping by, and this causes a lot of turmoil and frustration, especially in his relationships. Wilson’s play deals with dreams deferred and what it means to be a man, as well as covering themes of family and loyalty. Most notably, we see a marriage that looks loving and successful at the outset begin to fall apart as Troy’s lack of self-respect starts to crumble everything around him.