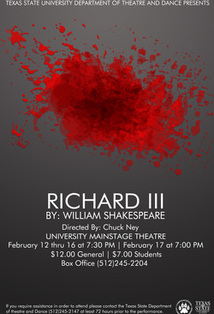 
Directed by Chuck Ney, “Richard III” is one of Shakespeare’s greatest historical plays that tells of the hunchbacked Duke of Gloucester who becomes King Richard III in a third world, war-torn country. This production takes a modern look at this classic tale of greed, corruption and the pursuit of power.