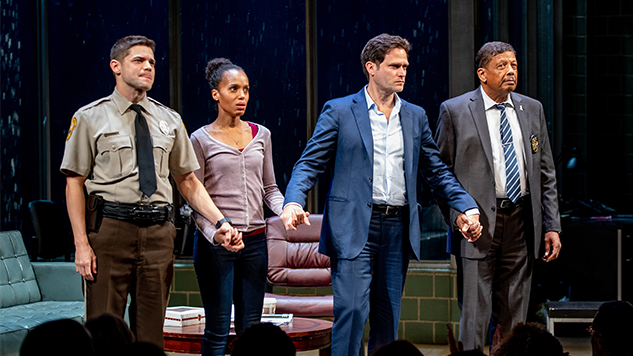 Netflix announced that it is adapting the hit 2018 play, with Scandal‘s Kerry Washington, Steven Pasquale (The Good Wife), Jeremy Jordan (Supergirl), and Eugene Lee (A Soldier’s Play) reprising their roles from the current Broadway production.

Written by Christopher Demos-Brown, the entire play takes place inside a Miami police station and delves into issues of race, identity, class, and police violence. Washington and Pasquale star as an estranged couple who are looking for answers about their missing 18-year-old son, and Jordan and Lee play the officers they interact with.

“I felt like I knew these characters, but I’d never seen them, particularly [her character] Kendra, before,” Washington told EW in November, as she explained what attracted her to this play so soon after her hit ABC drama ended. “I wanted to help bring her to life because I loved the idea of her being a part of our theatrical canon. I wanted her story to be told.”

She added: “[The story] is timely, but also I think it’s been part of the historic DNA of what it is to be an African-American mother, just to worry for the safety of your child…Part of all mothering is the lack of control over this other human being who, once they’re outside your body, makes their own decisions and has their own dangers. But there’s the added layer of powerlessness as a black mother because of the institutionalized racism and the cultural practices that endanger black children.”